At the outset of garden tractor pulling, people would bring their lawn mowers to a location and a pan type sled was used. The pan sled worked by having several fellows step on the sled as it went by, adding weight to it. As the power and speed of the tractors increased, this was no longer possible. Today a weight transfer sled is used. This is operates by having several thousand pounds of weight in a box that moves forward on a rail, putting more weight on the pan as the sled is pulled down the track. This weight can be moved faster or slower depending on the class of tractor being pulled.

In 1994, the CIGTP was established. It grew from a group of individuals who gathered occasionally to compete for bragging rights. Eventually, the group got large enough that they felt that they needed rules established by majority vote to provide for a more level playing field and that organizing would ensure the safety of all participants, spectators, and insurability of the events.

Since the inception of the club, it has steadily grown and become stronger not only in membership, but standing in the tractor pulling genre. The CIGTP frequently entertains spectators on alternate days, as well as concurrently with, the antique tractor pullers.

The CIGTP holds 15-20 pulls per year, and the other clubs in the area provide an opportunity to attend up to 25-30 pulls annually. The sponsors of the pulls usually focus on holding pulls during major community events, such as fairs and festivals. A rough outline of the area we pull in is Oblong on the south, Chrisman on the north, Medora on the west, and Marshall/Paris on the East side.

We have 12 classes that are pulled at each of our points pulls. The cost to build these tractors range from under $1000 for a competitive tractor to as high as ten thousand dollars for the modified tractors. Most of our pullers take extreme pride in their tractors and they are well maintained and kept clean and ready to pull.

This year, we have 103 tractors registered in the club, and 50-60 tractors attend each pull on average. A tractor is limited to pulling a maximum of 2 times per event. One tractor can pull in 2 different classes.

These events are very family oriented. Sons and daughters come and pull and the whole family has a great time at an alcohol free event. 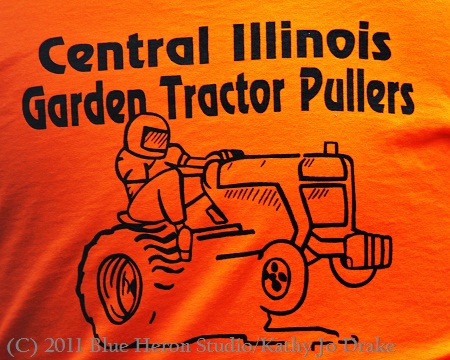